sewing fo: back in black skirt

I'm not normally some kind of crazy AC/DC fan. But that is exactly what happened here. I am, in fact, back in the world of black and not blue. Phew. Bet everybody was a wee bit bored of the perfect azure-ness. 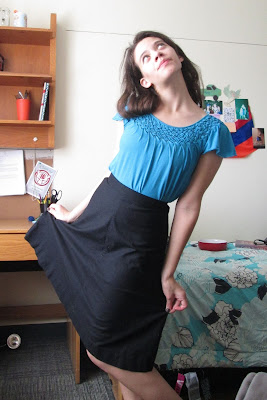 This was my end of summer project. The basic black fabric has an interesting (in my mind) back story. Originally, I thought I'd glimpsed out of the corner of my eye the most perfect white-on-black butterfly fabric at Hobby Lobby. I got ridiculously excited in a five-year-old kind of way. When I went back to buy my dream butterfly fabric, I found out it was just that: a dream. The actual fabric with its dramatic white flower outlines over grey leaves on the black background was pretty, but not butterflies. I pouted for maybe an hour, walking around the fabric department trying to find something among all the quilting cottons that would be appropriate for a basic, a-line skirt for a dark-color-loving teenage girl (me). And then I settled for most basic, almost boring, black cotton in the corner. I was going to add some lines of bias tape to the bottom to shnazzy it up, but I decided versatility was more important than color.

It's very simple, just a four-gore A-line skirt. It's so simple that I actually made the entire thing without the instructions, on account of the fact that the instruction sheet took a walk around the house. The only thing is that I messed up somehow and the skirt part wound up larger than the waistband so there's two little pleats at the top that are my I'm-fixing-my-oops issue. I got rid of the patch pockets of the original skirt pattern and then considered adding in-seam pockets. I decided against because I was lazy and didn't want to go through the trouble of trying to figure them out.

I also put the waistband overlap on the opposite side as compared to the lapped zip (which, I have to say, is one of my best lapped zips ever--I'm so proud). Well. Oops.

I finished most of the skirt on the inside with french seams, but because I had a lapped zipper in the center back, I decided to fold my seam allowances under and just stitch the edges. Because I was running out of black I decided to use some navy blue thread. It stands out really well, and I like having the (very) little tiny secret of having that inside splash of color. So, I guess the blue did sneak in. 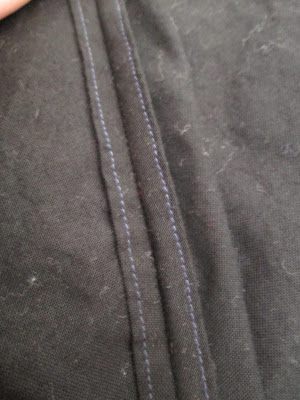 Overall, it's a great skirt. The oopses don't really bother me, as they're not really evident unless you're staring really closely. I love that it's actual, real cotton. It holds folds really well (almost too well), but that made for a pretty darn nice hem (in my humble opinion, at least). Even in the very small space of two weeks of class, I've been reaching for this skirt often. It's just such a good basic! Now I just need to make more shirts that would really show off its...basicness. :)